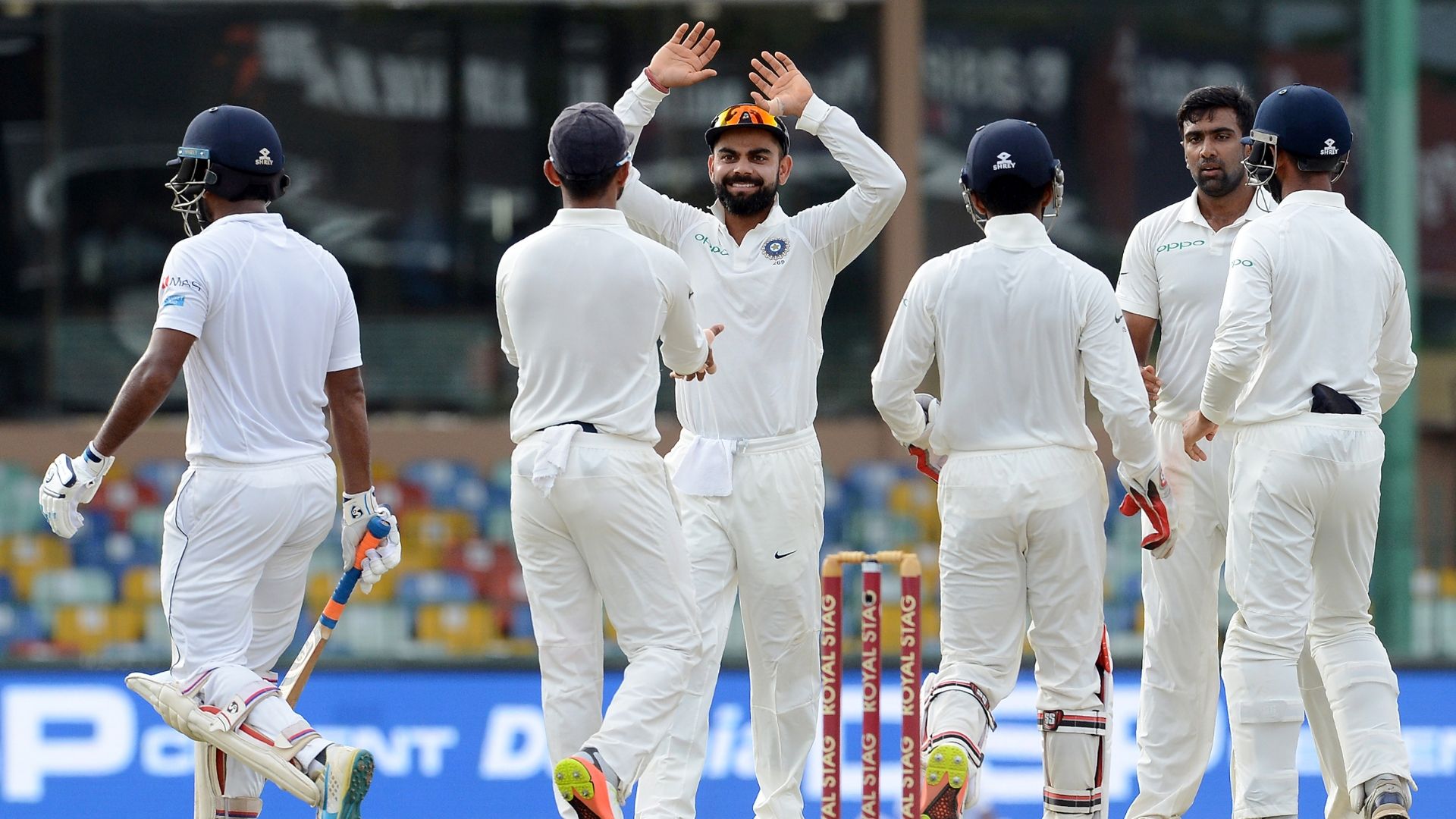 Dasgupta: SL batsmen must show intent against Jadeja and Ashwin

India lost their centurions, one at the start of play, and the other about half an hour to lunch, in a manner that suggested Cheteshwar Pujara and Ajinkya Rahane had heard the calls from the dressing room that they were hogging all the fun. Once they relented, a strong lower order – with an allrounder at No. 9 – took their total past 600 for the sixth time in nine months. Sri Lanka did have a few moments to celebrate, of course, but each time their batsmen cast a suspicious eye on the pitch. It had begun puffing up clouds of dust like a steam train from the sixties.

Virat Kohli declared on 622 for 9, giving the opposition 20 overs to survive. Upul Tharanga fell for a duck with the ball – juicy, short and on leg stump – sticking in short leg’s midriff. As he walked back, he might have felt like that kid in the arcade who had stood in an endless queue, impatiently waiting for their turn to have some fun, but just as he got his hands on the controllers, there was a city-wide power outage.

India’s spinners continued to create more chances – the hard new ball offering more bite off the pitch – and Dimuth Karunaratne succumbed for 25. R Ashwin was the successful bowler on both occasions as he strutted out his offbreaks like an art collector exhibiting his best pieces. There was the old faithful, with a 45-degree seam, turning and bouncing sharply. The cheeky undercutter, that comes out with no change in grip or action but for the seam being almost perpendicular to the pitch. And finally the bold carrom ball, probing the other edge. All of them were aimed at off stump, so there were no easy leaves.

By the end of the day, no one would be blamed for forgetting he had also scored important runs. Ashwin struck one of six fifties for India – a feat his team has achieved only twice in 253 away Tests. He got off the mark with an airy boundary behind point, pierced gaps at cover that seemed non-existent, and with a six over long-off, he asserted his place among the best in the business. Only 15 allrounders have claimed 2000 runs and 250 wickets in Tests. Ashwin reached there quicker than anybody else, in 51 matches.

Wriddhiman Saha had watched a team-mate being stumped after haring down the track, but that had no bearing on his move to do the same and swat his fourth ball to the long-on boundary. He is a composed player of spin because of his ability to both sweep and stride down the pitch. He can then choose to attack or defend or nudge gaps – which were available aplenty as the total swelled monstrously.

India scored a hundred or more in four of the five full sessions they batted at the Sinhalese Sports Club, and the only time they couldn’t, they’d already racked up 98. The carnage almost spilled over, in the 131st and 149th overs, when after berating the bowlers, Hardik Pandya and Ravindra Jadeja took aim at umpire Rod Tucker with blistering straight drives. Thankfully, his reflexes were spot on.

Sri Lanka began the morning a bowler short – Nuwan Pradeep, the only specialist seamer and taker of six wickets in Galle, was down with a hamstring injury. And to make up for his loss, they gave their opening batsman the second new ball. Karunarante responded with a nip-backer that pinned Pujara in front of the stumps in the second over of the day for the first wicket of his career. He only had to wait 41 Tests, and the time it took to overrule umpire Bruce Oxenford’s on-field decision by DRS.

So the man who had struck three centuries in three matches in this country, bested Dhammika Prasad on a green seamer in 2015, and Rangana Herath on this soon-to-be dust bowl, fell to a man who was bowling for only the second time in Test cricket. In other words, Pujara had leapt over the alligators in the moat, squeezed into the gap just as the draw bridge closed, slid down it with his arms raised aloft at a successful breach only to crash headlong into a guard sleeping against the wall.

Rahane took charge of the invasion now, progressing smoothly until he found fit to attack debutant Malinda Pushpakumara in the 111th over. Three balls previously, the left-arm spinner had pushed one past the outside edge, and in an effort to reverse the pressure, Rahane danced down the track only to be deceived in flight and mugged by sharp turn. Pushpakumara screamed as only a man who had until then been treated like a defective Herath clone could. It was his first Test wicket, his 559th in first-class games.

The original was starting to struggle too. Short balls from Herath once seemed like a set-up but now they are just reminders that the man is nearly 40 years old and is perhaps not putting as much body into his action as he used to. The evidence of the purchase he can elicit when he does so was apparent in the 122nd over, when a quicker delivery beat Ashwin’s late cut and crashed into his off stump. It was clocked at 91 kph by the speedgun, the exact pace Jadeja likes to bowl, and this is rapidly becoming the kind of pitch he can exploit rather effectively.

His next wicket – Saha stumped after the ball left behind a crater in the surface – had all of the Sri Lankans crowding around the good length area like people surveying a car crash. At stumps, they had two extremely talented batsmen unbeaten – the captain Dinesh Chandimal on 8 and Kusal Mendis on 16 – to combat a deficit of 572 runs.

Alagappan Muthu is a sub-editor at ESPNcricinfo

Three more lakes to be turned into eco-parks in Chennai