Unhappy with “stylish and quirky” haircuts of students, two schools in West Bengal have started a campaign involving hairdressers. While Nayaput Sudhir Kumar High School in East Midnapore issued notices to barber shops, New Farakka High School in Murshidabad organised a “sensitisation programme” for 40 local barbers in the presence of police officers to dissuade them from giving students fancy haircuts.

According to Basanta Gharai, headmaster of the Nayaput school, the “problem” of trendy haircuts began a year ago, but have recently “spread like fire”.

“Last year, we saw a few students with weird haircuts. We were shocked. Some had no side burns, others had puffs of hair on the top, some had alphabets like ‘Z’ marked on them. Earlier, only a handful of boys used to sport such haircuts, but the trend spread like fire,” said Gharai.

“Initially, we apprised the parents of the situation. But we were worried that rebuking or punishing students may backfire, so, we decided to send notices to the local barbers. On August 2, we sent notices to three shops in Nayaput area and asked them not to offer these haircuts to students from classes 5 to 12,” said Gharai.

The notice, a copy of which is with The Indian Express, said: “Under no circumstances the students are to be given two types of haircuts, including stylish ones. Please discourage them. They are your children. Help them get disciplined.”

The barbers were then called to school and given a warning. “The menace is under control now. Though some students still sport such haircuts, we believe this will soon be a thing of the past,” said Gharai.

However, the hairdressers said they only follow orders of their customers, like they have always done. “The boys would come to us with pictures of models sporting the haircut they wanted. What could we have done? If we had said no, they would have gone somewhere else. But now we decline their requests,” said Kartik Barik, a barber.

The move has found support among parents and a few students too. “This is a good initiative and we support the headmaster,” said Nandadulal Mondol, father of a Class 9 student of Nayaput school.

“Some of my classmates come sporting hairstyles of their favourite sports or movie stars. But I think one should desist from such experiments while in school. Discipline comes first. The trend is, however, dropping after the initiative,” said Suman Mal, a Class 11 student of the school. The school was established in 1947 and has 1,500 students.

The headmaster of New Farakka High School in Murshidabad, Manirul Islam said he had been wanting to crack down on the menace ever since he joined the school on July 17. “Most of the students with quirky haircuts belong to classes 11 and 12. When I confronted a Class 11 student on the matter, he responded rudely. His behaviour prompted me to call a barber to school to fix his hair. But at the last moment, I let him go after a warning. That’s when I decided to do something about this,” said Islam.

He then decided to hold a counselling session for the barbers and shop owners of the area. On August 1, he wrote to 17 barbers in the locality, inviting them to ‘Asun Amra Samaj Gori. Bikrito Sanskriti Parihar Kori (Come let us build the society. Denounce perverted culture)’, a ‘sensitisation programme’ which was conducted in presence of officials of the police and education departments.

On August 8, the seminar was held in the computer room of the school, where about 40 barbers and owners of barber shops turned up. “They assured me of not giving in to the demands of the students,” said Islam. 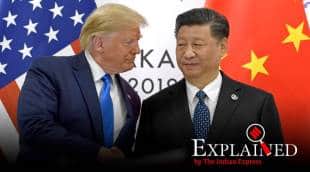 Established in 2001, the co-ed school has 2,641 students. Kartik Pramanik, secretary of local Kesh Shilpi Association (Association of Hair Stylists) said, “Most of us have no expertise in giving quirky haircuts. Students come to us carrying pictures of strange haircuts on their mobile phones. But after today’s meeting, we have decided not to give these haircuts to any student.”

Inspector in charge of Farakka police station, Uday Shankar Ghosh, said: “The headmaster of the institution sought help from the barbers and people from all walks of life to maintain discipline in school. We are ready to help him. It was good session.”

BJP to put up bookstalls but says ‘fearful of upsetting Trinamool, many backed out’