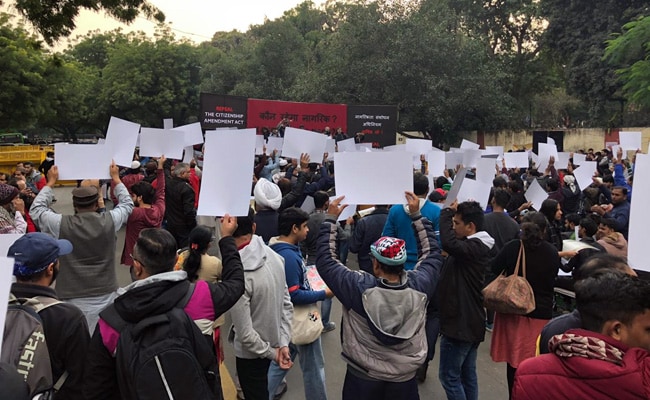 The protest at Jantar Mantar came a day after the police and students clashed on the streets outside Jamia Millia Islamia University in south Delhi. Some students were injured in the clashes. The DMRC said the entry and exit gates at the metro station at Jamia Nagar were shut for some time.

At Jantar Mantar, just a kilometre from the shopping centre at Connaught Place, a long traffic jam was seen due to the protest.

“Assam is burning, so will you wake up?” said a placard held up high by a protester at Jantar Mantar.

The amended Citizenship Act makes it easier for Hindu, Sikh, Buddhist, Jain, Parsi and Christian refugees who have come to India from Pakistan, Bangladesh and Afghanistan till December 31, 2014 and who face religious persecution back in their country to get Indian citizenship.

Some states in the north-east want protection under the Inner Line Permit – a system that regulates entry of Indian citizens to the states – so that they are exempt from the amended law and refugees who become Indian citizens don’t overrun them.

Large-scale protests broke out in Assam, and internet will remain snapped till Monday.

Prime Minister Narendra Modi and Home Minister Amit Shah have assured that the interests of the north-east will not be harmed by the amended Citizenship Act.

West Bengal, Kerala and Punjab have said they will not enforce the amended law. BJP leaders in the centre have, however, said states cannot arbitrarily decide not to enforce this law that was passed by both houses of parliament.

Kolkata: CPM to hit the streets during Amit Shah’s visit on March 1

‘One Nation, One Ration Card’: Bengal may pull out of Centre’s scheme on foodgrains

Streetwise Kolkata: Simla Road has its origins in a flower