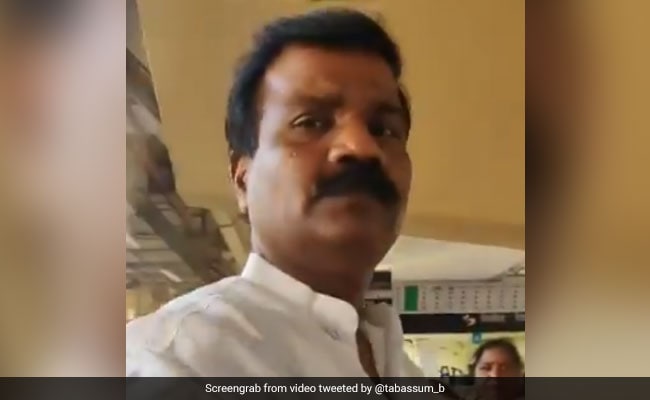 Mumbai Congress leader Vikrant Chavan was caught on camera shouting and abusing staff and security at a metro station in the city on Wednesday. In a nine-second video shared online by a journalist, who said the politician “got violent (and) hit my hand” when she stepped in to reason with him, Vikrant Chavan can also be seen and heard shouting at the journalist to “chal, shani ban (be smart)” while she and others try to calm him down.

In her Twitter thread the journalist says that as she entered the station she could hear Vikrant Chavan shouting at two Metro employees and two security guards. When she asked one of the employees – whom she identified as Sajid – for an explanation, she was told: “He is a corporator… that is the only reason he is shouting”.

“‘I am a corporator, do you know that?’ was the first thing I heard as I entered the metro station today. Congress corporator Vikrant Chavan was shouting at two Metro staffers and two security personnel who tried their best to calm him down,” she wrote.

THREAD:”I am a corporator, do you know that?”was the first thing I heard as I entered the metro station today.Congress corporator Vikrant Chavan was shouting at two Metro staffers two security personnel who tried their best to calm him down.Being a journalist, I was curious (1)

“I listened as a security guard requested that it was a silent zone, (but Vikrant) Chavan flared up and shouted louder. I decided to intervene, and asked (him) politely to calm down,” the journalist wrote, adding, “His voice grew louder, he said ‘Tu ja yahan se. Mein Vikrant Chavan hun. Corporator’ (You leave from here. I am Vikrant Chavan, corporator)”

I decided to intervene, and asked Chavan politely to calm down. His voice grew louder, he said “Tu ja yahan se. Mein Vikrant Chavan hun. Corporator”. At that point we decided to make a video. Chavan got violent, hit my hand to stop the video. (3) @INCIndia@INCMaharashtrapic.twitter.com/9L1wzcAN6M

The journalist then attempted to make a video of the incident on her mobile phone, but wrote: “Chavan got violent, hit my hand to stop the video”.

Further escalation was avoided after more security rushed to the scene and Vikrant Chavan, who later told news agency ANI the argument with Metro staff was over a travel token, quickly fled the scene.

“I had argument with officials after my ticket got stuck in a machine at a metro station. A woman started taking video. I pushed her mobile away. If I am wrong, she can sue me, if I am not wrong I will take action,” he said.

According to the journalist who was assaulted, Vikrant Chavan was charged with abetment and accused of “mental harassment” in the 2015 suicide of a Thane-based builder.

Chavan, with three other corporators, was accused of creating a nexus involving politicians and builders. He was even imprisoned for some time in Parmar’s suicide case. In 2017, Thane police raided his and his family’s house due to undeclared assets. (6)

The video comes only a few days after a 90-day-old clip of Kaptan Malik, the brother of NCP leader Nawab Malik, in which he can be seen thrashing labourers at a construction site, emerged online.

With input from ANI

Traders Protest, Down Shutters In Various Markets Against Delhi Sealing